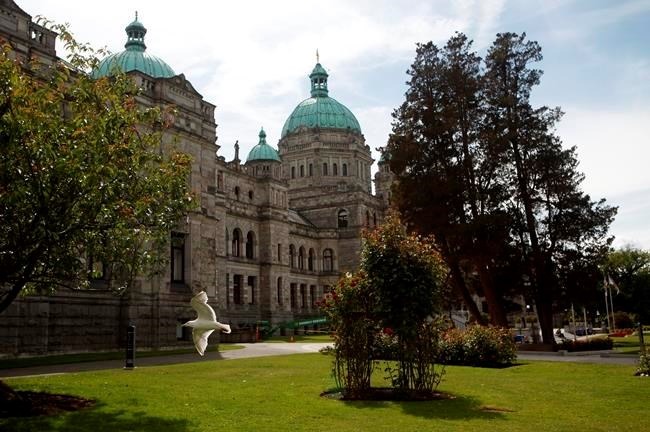 VICTORIA — Politicians described their return to the British Columbia legislature Monday during the COVID-19 pandemic like being back at school without most of their classmates or playing sports in an empty stadium.

Physical distancing requirements that limit the 87-member chamber to 24 politicians with debates, votes and interviews conducted through Zoom will take getting used to, but they agreed the province's business can't wait.

"It's strange being in here because it's like the first day back at school, but only about a third of the students have shown up," said Opposition Liberal Leader Andrew Wilkinson. "It doesn't have the usual excitement but we certainly have a lot of work to do."

NDP house leader Mike Farnworth said the day was a technical success, which he credited to members of the legislature taking their Zoom rehearsals seriously.

"I have to admit, this morning, when we were in the chamber, knowing how empty it is, it reminded me of yesterday when I watched the Everton-Liverpool football match in the (English) Premiership played in an empty stadium," he said.

But despite how sparse the legislature was on Monday, it didn't take long for the agenda to get crowded.

B.C. has never seen all sectors of its economy hurt by a downturn, she said. The update will include the most recent data since the pandemic started to affect the province in March, as well as June's unemployment statistics and factor in the federal government's fiscal update.

"We'll have another read from the private sector economists what growth is projected to be in B.C.," James added.

Wilkinson said the numbers James tabled in the government's budget last February have been torn apart by the pandemic and people need to know the state of B.C.'s finances.

"It's a fiction," he said. "The budget itself has no credible basis."

Wilkinson said the NDP's announcement last week to hold virtual town hall meetings and seek submissions to an online survey about pandemic recovery are not helping people who have lost their jobs or are struggling to pay mortgages.

"The NDP have had four months to come up with an economic plan and all we've heard is they are going to have a six-week survey now to see what people think," he said.

Premier John Horgan said the government introduced a $5 billion pandemic plan in March, which included tax deferrals for employers, a $1,000 tax-free payment to jobless workers and a rent subsidy program. The $5 billion plan includes $1.5 billion fund for recovery initiatives and the government wants input on where best to focus that money, he said.

"This is not a delay in our restart," Horgan told the legislature. "What we're doing now is asking British Columbians what their thoughts are."

Wilkinson called on the government to suspend the provincial sales tax, hotel tax and employer health tax for the next three months to spur consumer confidence and help struggling businesses.

The province has extended the temporary layoff period under the Employment Standards Act to 16 weeks, but that is set to expire next month and the Liberals want it extended until Aug. 31 to save jobs and help businesses facing severance costs.

Any temporary layoff longer than 13 weeks in any 20-week period was previously considered to be permanent but that can now be extended if the employee agrees.

Labour Minister Harry Bains said he was open to discussions about extending the severance deadline.

The government also introduced new legislation and amendments to existing laws, including changes that would allow pandemic emergency orders to be extended by up to a year once a provincial state of emergency is lifted.

There was also legislation to allow wills to be signed remotely and amendments to the Motor Vehicle Act that would give drivers more flexibility on the expiry of licence plate decals.

Earlier Monday, Speaker Darryl Plecas told the legislature the day's events were historic as they marked the first time the majority of members conducted the business of the house from outside the chamber.

"This arises from the unprecedented circumstances that our province, our country and the world are facing due to the COVID-19 pandemic," he said.