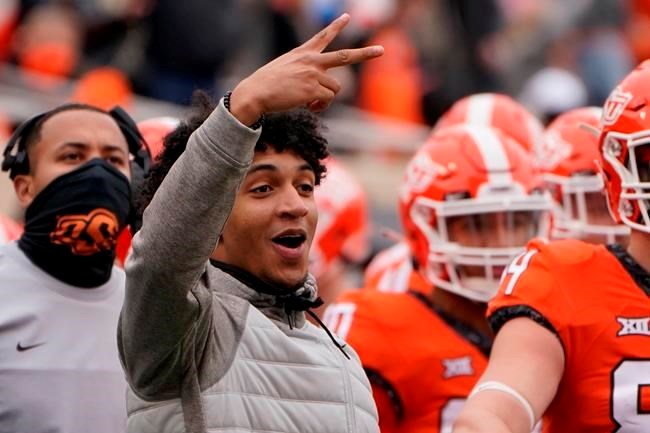 The 21-year-old from Sherwood Park, Alta., announced the news on Twitter Sunday.

Hubbard says he's dreamed of playing in the NFL since childhood, and wants to use his platform to support his family and impact causes he's passionate about.

Mike Gundy, his coach at Oklahoma State, told the school's radio pre-game show that Hubbard would not be in the Cowboy's season finale against Baylor because he had "chosen to go to the NFL." Oklahoma State won the game 42-3.

Hubbard was the 2019 NCAA rushing leader, but has been plagued by injuries this season and missed Oklahoma's last two games with an ankle injury.

"Obviously he didn’t have the year he wanted to and he knows that but to say he quit on his team is crazy...he was going through a severe ankle injury that he played through just to help his team win," Ogbongbemia tweeted.

Hubbard said on Twitter Sunday that he decided to return to college this year to continue his growth.

"This time last year, I decided to return to Oklahoma State for my senior season. I did so to further develop as a player, continue to mature as a man and to play another season in a program that I care so much about," he said.

He put up 625 rushing yards and five touchdowns in seven games this season, and finishes his college career having rushed for 3,459 yards and 33 touchdowns.

In June, Hubbard publicly spoke out against Gundy after pictures surfaced on social media of the coach wearing the T-shirt of a far-right media outlet.

This report by The Canadian Press was first published Dec. 13, 2020.