﻿ CAO's comments cause stir in Crossfield - hzlatk.com Skip to content

CAO's comments cause stir in Crossfield 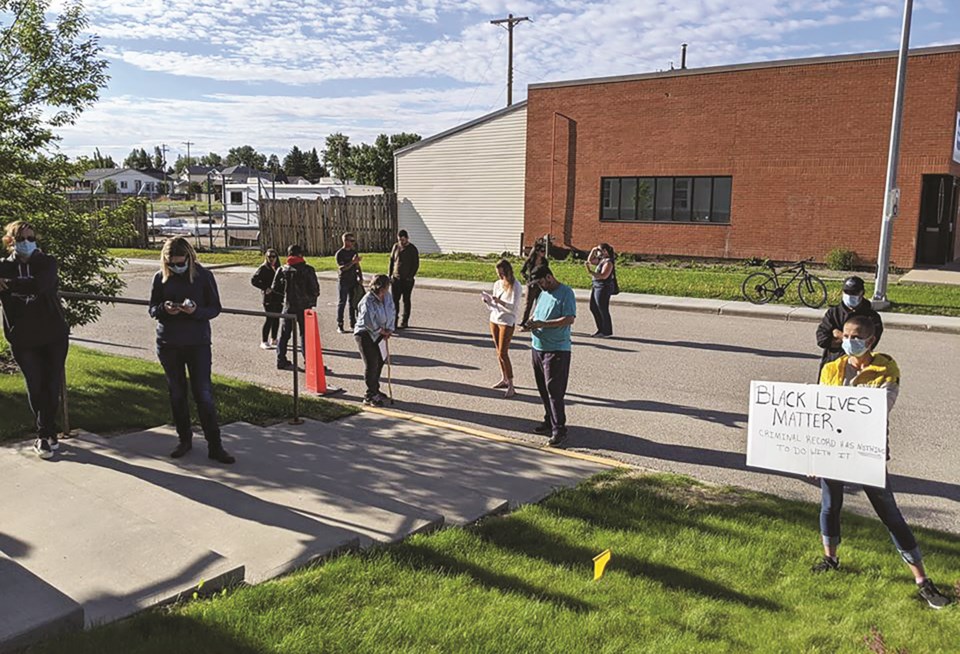 Comments by the Town of Crossfield’s Chief Administrative Officer (CAO) have sparked controversy in the community and spurred an investigation into both his conduct and that of some council members.

On Facebook, CAO Ken Bosman replied to resident Candace Bergner’s June 7 post asking if other residents were interested in attending a local event in support of Black Lives Matter (BLM).

In his lengthy response, Bosman expressed his disturbance at “how some African-American leadership makes heroes out of folks who were actually very bad people.” He also summarized the criminal history of George Floyd – the black man whose May 25 death at the hands of police officers in Minneapolis, Minn. has led to widespread protests and riots across the United States, as well as renewed international support of BLM. 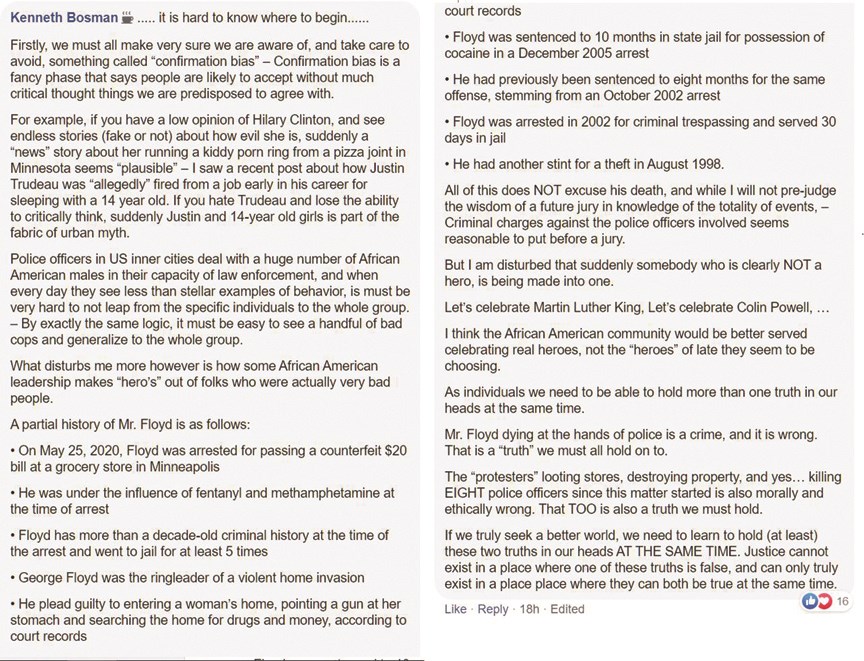 In his comments, Bosman wrote Floyd’s arrest record – including charges for drug possession, thefts and trespassing – “do not excuse his death,” but he was nevertheless “disturbed that suddenly somebody who is clearly not a hero is being made into one.”

Following Bosman’s comments, a letter attributed to Mayor Jo Tennant was posted to the Town’s website June 14. The letter denounced Bosman’s comments and claimed his post breached the municipality’s Code of Conduct and External Communications Policy.

“Bosman showed a lack of understanding of the pain his comments and strong language would have on some community members and showed bad judgment in making the post,” the letter stated. “I have conveyed…our collective disappointment in his actions and asked him to commit to focusing on Town business and promoting what a great community this is.” 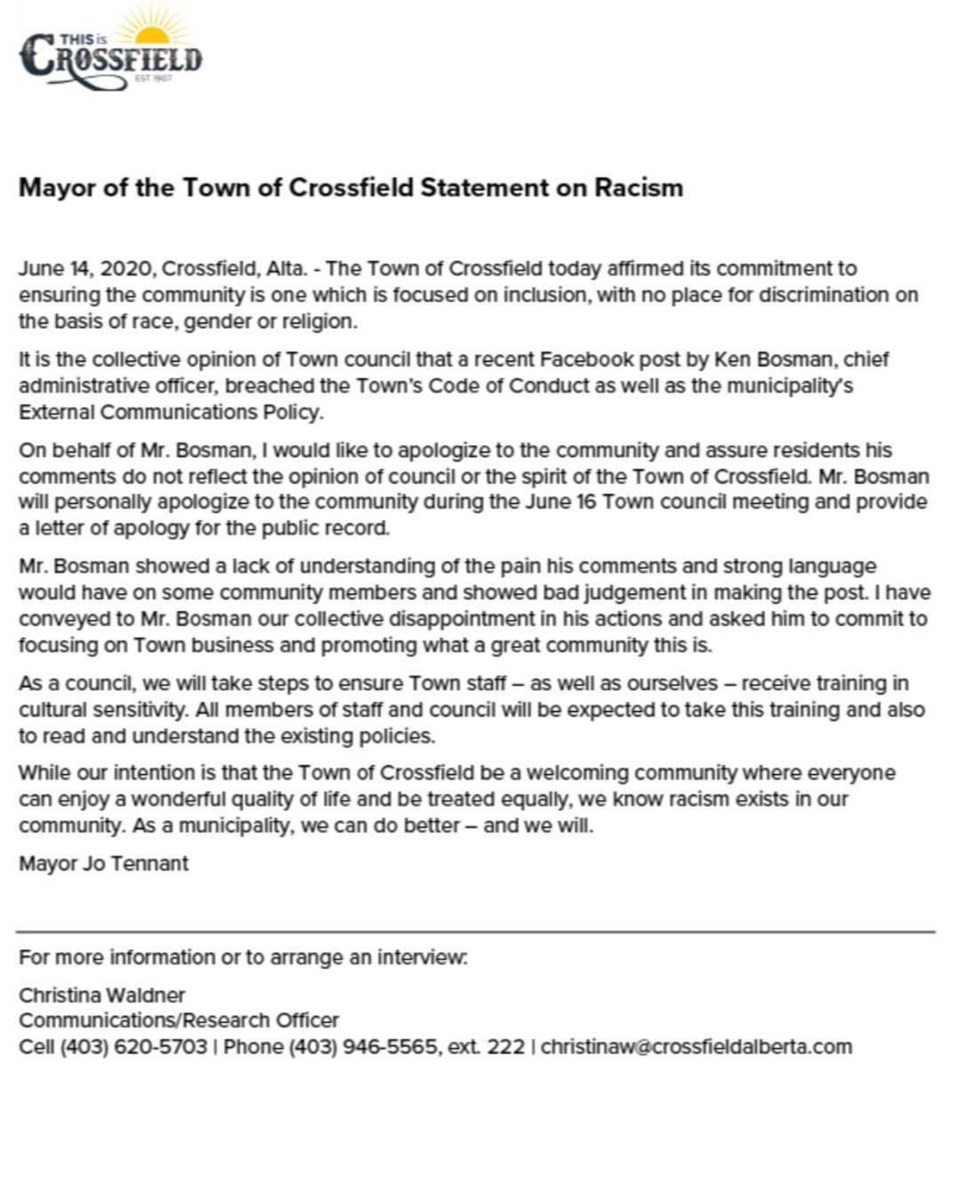 Mayor Jo Tennant's letter about Bosman's post was soon taken down and replaced with a statement from the Town. Photo submitted/For Rocky View Weekly.

“While our intention is that the Town of Crossfield is a welcoming community where everyone can enjoy a wonderful quality of life and be treated equally, we know racism exists in our community,” the letter stated. “As a municipality, we can do better – and we will.”

However, following a special Town council meeting, the letter was removed and replaced with a statement indicating the letter was composed by “a subset of council, acting without the ity of council as a whole.”

According to the statement, “The action was in explicit violation of the Municipal Government Act requiring council to act as a whole on matters of policy, and hence this action is now vacated, null and void.”

Further, the statement called Tennant’s letter a “substantial breach of administrative fairness,” and said it deviated from established due process. The statement claimed Bosman was denied the rights to be informed of the allegations made against him, provide witnesses in his defence or present information to council.

“Council deeply regrets that our processes did not meet the standards of basic fairness, and we unconditionally apologize to Mr. Bosman,” the statement continued. “We recognize the damage done to Mr. Bosman’s reputation from this invalid posting and have withdrawn the vacated materials from all locations we are able to access."

According to the Town, Bosman's posts and Tennant's letter will be reviewed by members of council, as well as a third party. The council members involved in the unized letter – Tennant and Deputy Mayor Liz Grace – will recuse themselves from the process, due to their “established bias against Mr. Bosman.”

In an email to the Rocky View Weekly, Tennant said she “made an error in izing the original statement and procedural steps were missed. That procedure must be followed to allow fairness to all.”

When reached for comment, Bosman said via email he "strenuously denies the false, unvalidated and unproven representation upon which the subset of council improperly acted, and confidently looks forward to his total and complete exoneration after a fair, open, unbiased and transparent review of the facts."

The topic came up at the Town’s June 16 council meeting, which was originally intended to take place behind closed doors and be live streamed because of the COVID-19 pandemic. However, a small crowd gathered outside the meeting.

After council voted to rescind the Town’s State of Local Emergency (SOLE), Coun. Beth Gabriel moved to allow the public to attend the meeting and sit in the gallery. The motion was approved.

During public question period, some residents questioned Bosman about his comments. Resident Melodie Davidson asked if he would apologize publicly.

“You, sir, have disappointed me and everyone else in this room.”

Bosman said his official statement on the matter would come after the internal investigation concluded. He added he personally reached out and apologized to those who had expressed concern about his comments, and made the same offer to Davidson, who reiterated he should apologize publicly.

“It is not and has ever been my intent to deliberately offend anybody,” Bosman said. “I come from a personal background and culture where there is extremely vigorous debate and we throw ideas back and forth. Sometimes, emotions get a little energized and sometimes words are poorly chosen. Absolutely, when we review this matter, I can look at the totality of things. If I had said something that is poorly worded or offensive, I would certainly come clean…more importantly, I would reach out to the individuals whom I may have hurt.”

Bosman also brought up his past advocacy for gay rights, and said while he was imperfect, he’d “worked on tolerance my whole life.”

According to Christina Waldner, communications and research officer, the Town would not be commenting on the matter any further as it is now an internal issue.

About the : Scott Strasser